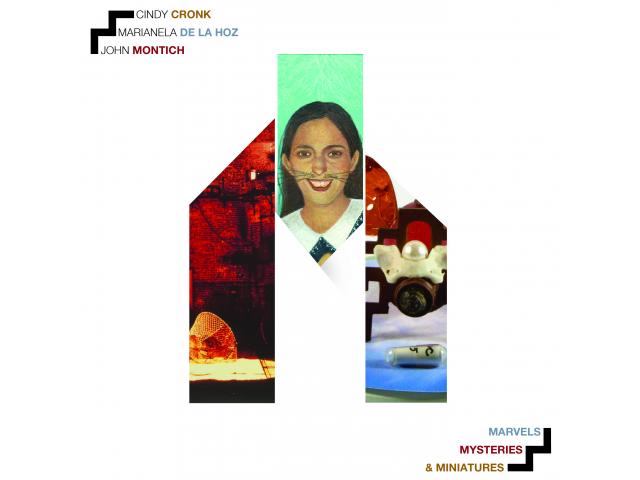 Small and precious, child-like fascination, attention to the littlest of details, intimacy, discovery –all words used to describe the "cabinet of curious" artworks by Cindy Cronk, Marianela de la Hoz, and John Montich. Symbolic messages, relics inside reliquaries, and quiet, mysterious places –even seemingly "religious"— reveal themselves within the inner workings, and dark corners, of their work.

Cindy Cronk
Cronk's miniature assemblages capture the wonderment of little everyday things, relics, the remains of the past and the ephemeral nature of life. With found objects from nature, man-made readymades –parts and pieces of things which once had a function or belonged to something else— she constructs a "new" object that reveals a new symbolism and purpose. Referencing Joseph Cornell's Surrealist technique of "unexpected juxtaposition," Cronk often finds objects that, by nature, contain their own meanings. But by taking this a step further –by adding more to the context— she develops a new multi- layered visual meaning within each artwork. An anthropologist at heart, she sees a world full of wit and sentimentality, tucked inside each object she finds and utilizes. As objects are combined, contrasted, supplemented, and complemented, her assemblages speak volumes –sometimes becoming a narrative within itself, a riddle, or even a "play on words." What develops are new ways of expressing and seeing: her works question and express the abstract concepts of love, life, truth, reality and fate. Using humor, irony, minimalism and ostentatiousness, hybrid creatures and imaginary realms, Cronk captures varied philosophical moments inherent to human nature: the "lightness of being" contrasted with emotional and spiritual darkness, sub-consciousness with memories and nostalgia, all the while taunting the eventual mortality we all face.

Marianela de la Hoz
Much like Cronk, De la Hoz develops a visual language that addresses human nature's attributes by creating a discourse around the concepts of love and evil, heroism, shame and embarrassment, age, youth and mediocrity, fantasy and the psyche, religious zeal and human mortality. With the intimacy of small-format artworks, De la Hoz expounds upon history, religion and literature by story-telling with humor and irony, while exploiting the human natural propensity for curiosity and discovery. By observation of the fine details –the things normally unnoticed—she invites us in, to peer through a voyeuristic lens onto a miniature world of secrets, mysteries and treachery. The smallness of her work causes us to want to come closer— much like a fly enticed into a spider's web. That closeness of space yields a microscopic view through which we encounter many tiny worlds enveloped in marvelous theatrical dramas, with a seemingly familiar cast of circus characters and freak shows, inside a nerve-wracking house of horrors. We may even find ourselves encased within the spectacle of a telenovela. Once lured into these miniscule worlds, much like Alice in her Wonderland of mirrors, we find ourselves trapped inside, finding we are looking at our own reflections within these bizarre walls of make-believe.

John Montich
Montich's photographs, caressed with rust and sepia, reminisce of times past, and of places, or things, lost and long- abandoned. Dark corners and isolated expanses imbue narratives of curious seclusion. Much like post-war Neo-realist Italian film, remote scenes are infused with a confused disarray of forgotten items left behind –as though previous occupants escaped in a flurried rush. Now quietly quarantined spaces, lifeless and unattended, these places beg the question: "What and who was once here?" Through the elimination of the horizon line in his subjects, Montich forces us into a new way of seeing that incites a story –a narrative of sorts. The small format used generates a curiousness and intimacy that tightens our point of view, in turn, empowering the scene. Lonely spaces become mysterious, yet familiar and meaningful. We, the viewer, become "the ghosts" wandering the halls of these wall-stained, partially dismantled, rooms and passageways lost-in- time. We might even perceive or imagine "the ghosts" of those who were once there. By considering the commonplace, discarded, and ordinary things, we nostalgically recall the past, filling in the answers to our own questions, as we meander through these horizon-less interiors.