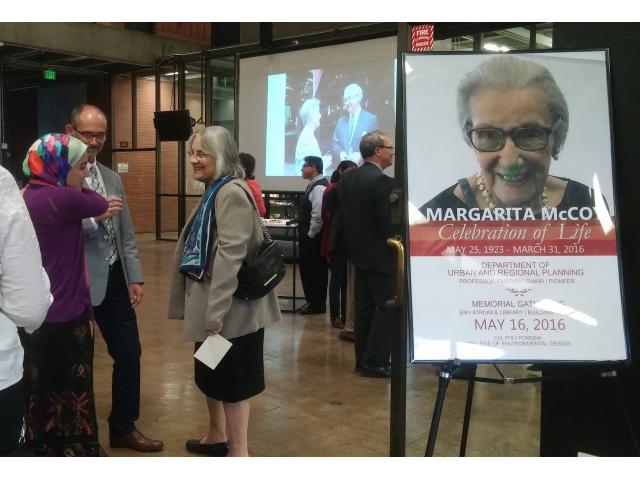 Margarita McCoy Celebration of Life hosted by the College of Environmental Design on May 16, 2016

Born in New York to a German-American brewing dynasty, Margarita McCoy was a pioneer for women in the urban planning field. Her 50-year career began in 1959 as an elected member of the planning board for the City of Sudbury in Massachusetts. She was one of the first in the nation to hold a tenure-track position in planning and the first female full professor of planning in the United States, teaching at Cal Poly Pomona and the University of Southern California. At the time McCoy accepted her professorship, she was the only female faculty. By the time of her retirement in 1989, CPP’s urban planning program had risen to national acclaim, and female professors were in close parity with their male colleagues. That diversity is reflected in the department’s current pool of tenured and affiliated faculty.

The College of Environmental Design celebrated her life with a memorial on May 16, 2016. The event was attended by McCoy's family and friends to share and hear stories about triumphs and challenges in her personal life and the early days of her ground-breaking role in planning. Among those in attendance were her son, Dr. Alfred McCoy; planning colleagues Linda Dalton and Carol Barrett, alumni Steve Preston and David Salazar; and URP colleagues Rick Willson, Dave Bess and Chuck Hotchkiss.

McCoy was active on several professional and accreditation boards including the American Institute of Certified Planners, the American Planning Association, and the Association of Collegiate Schools of Planning – the latter of which established an award in her honor recognizing individuals that further the advancement of women at universities though service, teaching and outreach.

McCoy served nine years on the La Habra Heights Planning Commission, and through 300 public hearings opened up the process for the city’s general plan. She worked to balance North Orange County development with nature preservation, determined to protect a patch of California meadows in the city’s steep hills at Powder Canyon. It was only after she could no longer hike down ravines and construction sites to inspect every building application did she decide to retire in 2012 for the third – and final – time at age 88.

To honor McCoy's legacy and contributions to the urban planning profession and higher education, the College of Environmental Design at Cal Poly Pomona established the Margarita P. McCoy Scholarship in Urban Planning.

1. Visit the Margarita McCoy Scholarship giving page to make an online contribution, or