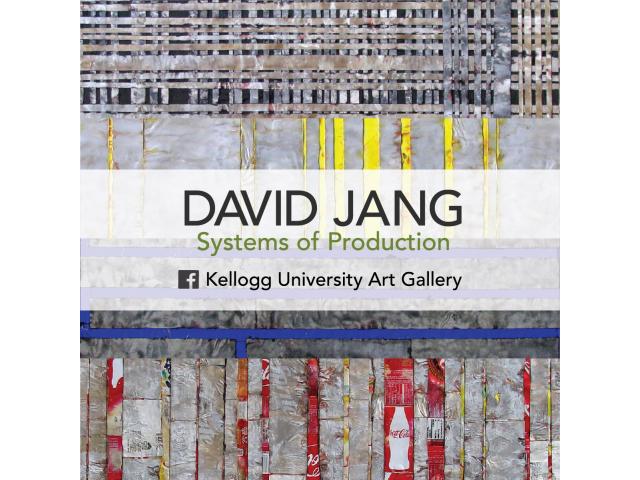 David B. Jang’s work is about survival, or what he calls “life tactic.” For him, survival requires the transformation and maintenance of continuous order, and order means harnessing energy. But because energy and matter cannot be destroyed, only transformed, his work engages in this reality by maintaining a constant state of motion: transforming and transferring themselves over time. The task of his work is to produce line and mass in various states –a process in which the work is never realized in its final form– but just like our body, is only continuously progressing. Requiring the continuous transfer of energy, these ordering systems will almost always be found in a state of maximum disorder, or will move towards it. 'Meaning' is possible by creating order against the law of entropy (or chaos). Jang is interested in things that can be set in a mode of constant production and form-making, thus, ordering, and therefore in a constant state of 'meaning creation'. The meaning of this generation is connected to the human compulsion to produce forms which are connected to the technological systems of production that we have set into motion. The behavior of technological systems of production are random and opportunistic, just like the behavior of humans. These objects are interacting with us everyday, causing us to become remote from the physical interaction with reality.

Jang is constantly seeking self-organizing systems known as autocatakinetics. The material of his artworks and their operations and activities function as morphemes, that is, as the grammar of a sociological language. He sees industrial society operating as a living organism, because it is combined with the treatment of organic life forms within our existence.

This artist finds a strange reassurance in a “rich harmonic practice that addresses the conditions that define our daily existence,” by creating a formal aesthetic out of the utilitarian, mass-produced object.  In other words, if in society property ownership is a pathway to the ‘American Dream’, then Jang’s ‘life tactic’ is to subvert, dissect, comprehend, and redirect property and its use in mechanical reproduction to verify its potentiality, and truth -or uncover its lie.  In this way, the invisible inner workings of things are made visible.

He states that contemporary relations between art, politics, technology and science may be identified as a field of obsessions.  By duplicating, multiplying, and unifying the diversity of human activity, represented by consumer materials and artifacts, he desires to emulate the experience of contemporary human urban life.  Jang is propelled by the notion of redirecting the short life of cast-off mechanical reproductions into genuine objects of supreme beauty. If consumer materials are becoming the new landscape, and its remnants permanent, then Jang desires to make them approachable, lovely and infinite, instead of heavy-handed, discarded and ugly. He desires not just to make sense of them, but to make them venerable, meaningful and a reflection of human self-consciousness.

Take a glimpse into the engaging artwork featured in "David Jang: Systems of Production"