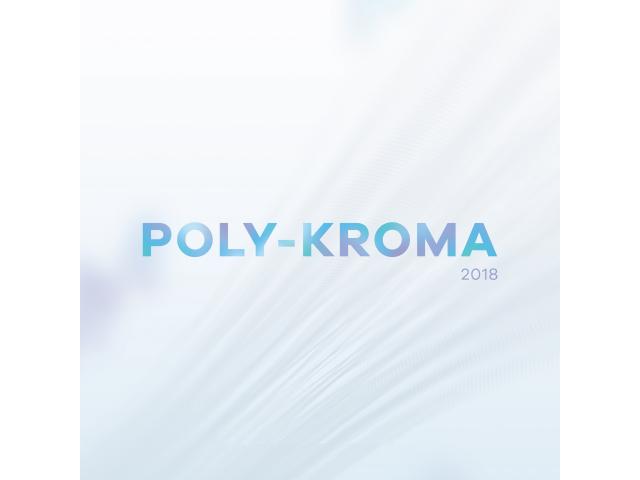 Poly-Kroma is the annual art and design exhibition that features the talented work of art students and graduating seniors of Cal Poly Pomona's Art Department.

The Kellogg University Art Gallery welcomes the Cal Poly Pomona campus community, students and their families, faculty, staff, administrators, and the public to PolyKroma 2018.  PolyKroma  consists of two distinct shows that celebrate Graphic Design directly resulting from coursework completed within the Art Department. The two components of PolyKroma  include: Industry Day—the senior Graphic Design exhibition; and the 2018 2D3D Juried Art Exhibition. Industry Day  functions as a capstone experience for the Graphic Design major, and serves to present the work of seniors to the professional and surrounding community.  The 2D3D Juried Exhibition is competitive and displays the work of students in the Bachelor of Fine Art program.

Industry Day 2018 presents senior graphic design portfolios and collateral material from the Professional Practices in Graphic Design course. The portfolios include selected work from the totality of the student’s experience at Cal Poly Pomona. The resulting exhibition is a team effort that represents progressive accomplishments achieved throughout the curriculum.

The 2D3D Juried Art Exhibition features art and graphic design work by students at all academic levels. This show, which began in the mid-1970s under the leadership of Professor Diane Divelbess, first took place inside the Cal Poly Pomona University Library. It was originally started to showcase artwork produced by Cal Poly Pomona’s students in the newly established Art Department. Displays of two-dimensional artforms such as painting, drawing, photography, printmaking, poster design, and book-making; three-dimensional arts such as pottery, ceramics, sculpture, assemblage, and installation art; and more diverse and emerging artforms such as time-based media, digital and technical illustration, and animation. This exhibition has now been delighting the University campus community for over four decades. Please join the Art Department, College of Environmental Design, and University Art Galleries in celebrating these Fine Art and Graphic Design events on our campus!

Keep yourself up-to-date with our social media!

Industry Day 2018 presents senior graphic design portfolios and collateral material from the Professional Practices in Graphic Design course. The portfolios include selected work from the totality of the student’s experience at Cal Poly Pomona. The resulting exhibition is a team effort that represents progressive accomplishments achieved throughout the curriculum.

The art of the students will be judged by industry professionals. Awards will the given out at 7 pm.

Please join the Art Department, College of Environmental Design, and University Art Galleries in celebrating these Fine Art and Graphic Design events on our campus!

This 2D3D Juried Art Exhibition features art and graphic design by students at all academic levels. It is a juried competitive exhibition where students are awarded monetary scholarship prizes. This year’s exhibition was juried by: Jennifer Gunlock, Lisa Ly, and Peter Mays.

Jennifer Gunlock is an alumna of Cal Poly Pomona where she earned a BA in Fine Art in 1998. She earned her MFA at California State University, Long Beach in 2003. She has exhibited nationally and in local venues such as Sturt Haaga Gallery at Descanso Gardens, Los Angeles Municipal Art Gallery, Angels Gate Cultural Center, and Orange County Center for Contemporary Art. She has also been Artist in Residence at Brush Creek Foundation for the Arts in Saratoga, Wyoming and at the Pajama Factory in Williamsport, Pennsylvania. In 2014-15 Gunlock participated in in “Fires of Change,” an NEA-funded collaboration between artists and scientists, to translate the social and ecological issues surrounding wildfire in the Southwest. Following a fire science bootcamp in the Grand Canyon, and a year to complete a project, a group exhibition opened at Coconino Center for the Arts in Flagstaff, Arizona in September 2015 and traveled to the University of Arizona Museum of Art. Based in Long Beach, Gunlock is a traveler who imbeds her wanderings into the artmaking process. With an attraction to crevices, old growth and decay, she photographically collects imagery such as the gnarled oaks and cemetery crypts of New Orleans, lichen-covered slate rock cliffs of Pennsylvania, and the beautifully decaying Beaux-Arts and Art Deco buildings of Los Angeles, to later deconstruct and assign new meaning in the studio.

Lisa Ly developed a passion for food while working towards her BFA in Graphic Design at Cal Poly Pomona is 2015. After co-developing a pop-up ice cream brand from the ground up during her undergrad and photographing all the best eats in LA, her career has led her to her current role as Graphic Designer and Marketing Coordinator at Sysco Los Angeles. She is responsible for designing art and copy layouts for material to be presented by visual communications media such as menus, books and packaging. This includes designing and developing marketing support materials including brochures, flyers, promotional videos, and product information distributed by Marketing and Sales departments. In addition, she plays a core role in the planning, marketing and executing of special events and trade shows for Sysco Los Angeles. During her downtime, you can find her searching for the next best eats in the San Gabriel Valley area.

Peter Mays is the Executive Director of the Los Angeles Art Association (LAAA) and its premiere exhibition space Gallery 825. LAAA is a 93-year-old organization with a commitment to Los Angeles' emerging artists. Since joining LAAA in 2005, Mays implemented cultural exchanges with Switzerland, Korea, Italy, France, Germany and China, initiated collaborative programming with institutions like Harvard, MoCA and Otis, as well as with artists Tim Hawkinson and Lita Albuquerque, secured the renown curators to jury LAAA exhibitions, increased the organizations career development and direct services and created a public art program. Beyond this commitment to LAAA, Mays has curated exhibitions throughout SoCal for various arts, educational and civic agencies. He was the recipient of the West Hollywood Chamber of Commerce’s Creative Economics: Art and Business Partnership Award and is a past recipient of the Art to Life Award sponsored by Art & Living Magazine, Sotheby's International Realty and A&I for his work on behalf of emerging artists and art communities. As chairperson of the West Hollywood Arts and Culture Commission’s Art on the Outside, Mays led the city's nationally regarded outdoor public art programming which has been praised in Art Forum, the New York Times, and the Americans for the Arts. Peter helped to launch the region-wide LA Arts Month effort from 2009-2011 where he served on Planning Committee and the Program Committee, and served on LAUSD's National Study Group which was charged with informing the nation's second largest district as it plans a decade of K-12 Arts Education. Mays has served on the Board of Directors for the MOCA Contemporaries and the Fellows of Contemporary Art.

Reviewing 180 submissions with over 165 component parts by 92 students in 4 rounds of eliminations, the jurors deliberated at length, over 3 hours, to make the 77 selections of artworks exhibited here. On first viewing, jurors focused on the “stand-outs” and artworks with most originality. On the subsequent rounds, they considered concept and craft.  Overall, jurors considered and discussed craftsmanship and presentation, skill in technical use of media, as well as creative execution of content and concept. After making their final selections, the jurors very quickly honed-in on those pieces they granted top prizes to: special images and objects that also contain unique qualities that set them apart from the rest. From there, jurors nominated and unanimously agreed on first, second, third place, and honorable mention awards in the Fine Art and Graphic Design categories.

Special weekend event for the families of the students participating in the show. Hours: Saturday 12-4pm, Sunday 12-8 pm